Building a better future one kid at a time

To separate this class from a typical hobby rocket building class we decided to incorporate some elements that dive a bit deeper into the engineering that goes on in the rocket industry.  One of the biggest steps in manufacturing a rocket is the testing process.  This allows an engine to be qualified and characterized before it is integrated onto the vehicle and flown.  During the test, millions of pieces of data are recorded and analyzed to fully understand how the particular rocket will perform in flight.  We wanted to bring a scaled down version of this to the NYA rocket class.

A test-stand was built fit for the types of rockets we were using.  This test stand had a load cell to measure the thrust output of the engine.  A thrust vs. time plot was generated, which gave the students a real understanding of how these rockets perform.  After testing an A, B, and C engine we went inside and gave them each a thrust plot and they had to figure out which engine it was based on the average thrust, burn time, and delay time.  This was an interesting project that all of the students really got into.

Week 8-Looking into a Bigger Rocket

This week was all about preparation.  We had to prepare the students for their adventure into building a bigger more powerful rocket.  These types of rockets have more parts to deal with, less instructions, and greater potential for dangerous situations.  We had the students pull out all of the parts and accurately label each one to make sure we had everything we needed.  In addition, this gave them some familiarity with the different vocabulary and an idea of each parts functionality.  After that, we had each student read a step of the instructions and had the entire class attempt to pull out the necessary parts and simulate what would be done.  This class didn't have the excitement of launching a rocket but was extremely necessary for the weeks to come.
Posted by Yoni Malchi at 12:30 PM No comments:

After two weeks of consecutive building the students were excited to finally launch their rockets.  We were planning on using the hand-held altimeters to measure the height of the rocket, however they went too high and we did not give ourselves enough distance.  We started at 50 m from the pad and ended up 150 m from the pad, but, even at that distance, the rockets went too high.  In addition, the fact that we couldn't launch straight up in into the air was a problem for height measurements.

In any case, all of the rockets launched perfectly.  We equipped some with B engines and some with C engines giving the students a taste of how different each of the engines are.  They were all very excited to see the intense speed and power these little engines provided, and were thrilled that all of the parachutes worked and their rockets were recovered.  Now it is on to bigger and more powerful rockets!
Posted by Yoni Malchi at 12:25 PM No comments:

We started off this week with another review of the rocket designations bringing each student to the board to fill in the rocket's total impulse, thrust, burn time, and delay time.  This week went a lot faster than last and we could tell their confidence was building!

After going through this review we gave the students a little taste ofwhat was going on in the  rocket industry.  It was a busy week in terms of launches. On Friday, March 4th a Taurus rocket carrying a NASA payload failed due to the inability of the payload fairing to jettison.  The students were asking a lot of questions about exactly what happened, who was responsible, and how much money was actually lost.  The satellite cost almost $500 million!  The next night an Atlas V launched an Air Force Space Plane successfully and the Friday after class (March 11) there was a Delta IV launch of a secret NRO satellite.  More details can be found at www.spaceflightnow.com

Finally, it was time to continue building the hobby rockets.  The students all picked up from where they left off last week and didn't miss a beat.  All of the rockets were finished up and we actually tried to launch one.  We decided to go with the weakest engine, an A-engine, just to get a feel for how powerful it was going to be.  Unfortunately, the rocket was too heavy for the engine and it only went up about 15 ft. in the air.  It was a good lesson, however, and the students are looking forward to putting in a more appropriate size next week.
Posted by Yoni Malchi at 9:36 PM No comments:

We started the class with a 10 minute review of the engine name designations, the current US launch vehicles, and the definition of thrust and total impulse.  Given a table with the total impulse ranges for each letter the students could pick a total impulse and subsequently find the average thrust, total burn time and engine delay time.  For example:


Total Impulse Table
If we were given a rocket with the designation C8-6 this would be its specifications:

Then it was time to start building the hobby rockets.  The students each got to choose their own designs because the kit gave enough parts to have 64 different combinations.  Each advisor helped out one student and guided them through the building process.  It was interesting to see how the students mind sets had to change a bit to understand the sequence of steps given in the instructions.  They all seemed to be very interested overall, but definitely needed a lot of help.  They are each about half way through the building process and will hopefully finish up next week.
Posted by Yoni Malchi at 9:05 PM No comments:

We started getting the students acquainted with the kits they will be using and the engines that will power their rockets.   We went through the engine designations and touched on what thrust and total impulse are.  Thrust is the measure of the force the rocket provides to lift itself off the ground and total impulse is the measure of the rocket engine's thrust multiplied by the total time it burns.  We lit a small engine on the ground to give the students a little show.  That thing was a site to see!  After that the students got to open their rocket kits and start dry fitting the pieces together.  I am looking forward to building these hobby rockets and flying them.
Posted by Yoni Malchi at 3:59 PM No comments:

We utilized the water rocket for this class to teach about two things we do in industry on a regular basis, trade studies and optimization.  We had three water rockets; one with fins and a nose cone, one with a nose cone and no fins, and one with no fins and no nose cone.  With these three different designs we were going to run each of them at 3 different water levels to see which design was optimal at each water level.   The trade off for the nose cone was aerodynamics vs. weight and for the fins was stability vs. weight.  The students measured the height of the rocket with a protractor gun.  Because they didn't know sine and cosine yet we just used the angle as an indication of the height.  We were able to get through this lesson in an hour and the data showed some interesting results!  Below is the graph we came up with. 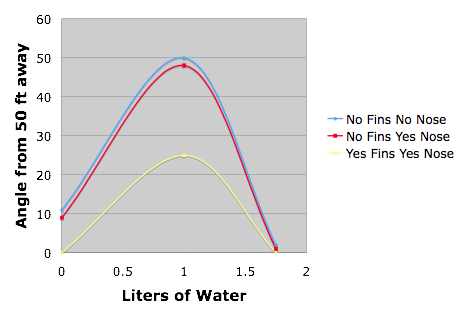 It worked out so nicely!  You can see that at every water level the rocket with no nose cone or fins went the highest.  When you add a nose cone and/or fins any benefit they may add is canceled out and actually hindered by their weight.  In addition, you will notice that 1 L seems to be the best option for what we tested.  What do you think the optimal water level is?
Posted by Yoni Malchi at 3:56 PM No comments: